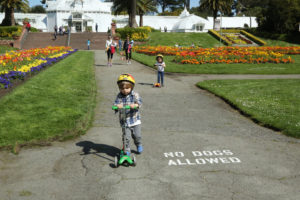 Rudyard Kipling said, “San Francisco has only one drawback: ‘ tis hard to leave.” San Francisco has a little of everything. The vistas from the top of every street are mesmerizing. The beaches are beautiful. Cultural festivities abound throughout the year. San Francisco is quirky enough to keep you entertained forever and wholesome enough to be an ideal place for raising children. Here are 10 other reasons why raising kids in San Francisco is awesome.

You don’t have to suppress your cravings for raw fish for 18 years after you have your children. Start them young, and they’ll eat the same foods that you do. Plus, all of their friends will be doing it. The same goes for embracing a vegetarian or vegan diet.

2. The area’s entrepreneurial spirit may rub off on your children.

Bordering Silicon Valley, San Francisco is constantly exposed to the innovative essence of companies like Google, Facebook and Mozilla. In 2014, the University of San Francisco made it into Forbes’ ranking of the country’s most entrepreneurial universities. Your child will grow up knowing what it’s like to be part of something bigger than a 10-foot cubicle.

3. Your child will embrace diversity.

San Francisco has always been a city that has encouraged variety, including diversity of thought and culture. Although almost all teenagers go through a period of trying to find themselves, living in San Francisco may make kids more likely to love who they are.

Kids in San Francisco learn how to sort the recycling before they learn their alphabet. Worldette says that San Francisco may be the most earth-friendly city in the country. Residents and government officials alike make sustainable practices a priority. The city has banned plastic bags and disposable plastic containers. The public transit system helps prevent pollution. Businesses work hard to reduce their carbon footprint.
We always talk about the fact that we’re preserving the Earth for future generations. Our children are part of that future. They’ll play a direct part in helping to protect their environment so that they can thrive.

5. There’s always something to do.

Kids can go from the beach to a world-class museum. There’s plenty of green space that provides a free place to play. Cultural events, concerts, street fairs and parades continually fill the city with life. Raising a kid in San Francisco is never boring, and it’s not expensive to keep things exciting.

6. Your kid won’t grow up to be that peculiar adult who never learned to ride a bike.

Bicycling Magazine says that San Francisco is one of the best cities for bikers. Drivers are accustomed to sharing the road with cyclists. There are even traffic signals set up just for the two-wheeled vehicles.

7. Your kid may have a healthier heart.

Speaking of cycling, people who ride their bikes to work are healthier, according to an NPR report. Plus, nearby vineyards ensure that plenty of wine is available. How does that relate to your child’s health? The Mayo Clinic says that red wine contains heart-healthy antioxidants. Appreciating the output from the local vineyards can help you stress less about parenting too.

8. You’re surrounded by a village.

Ask anyone who lives in San Francisco, and they’ll talk about the city’s community feel. A strong social network is key to managing stress, experts say. It’s easy to meet people in San Francisco. The free public events encourage everyone to come together. The social diversity helps to ensure that you’ll find a friend around every corner. Plus, a strong community helps you find support when parenting becomes overwhelming.

Technology has made it harder to get kids to play outside these days. If your children have to put on four layers of clothing before running out the door, making them go outdoors to play will always be a struggle. Likewise, the thought of slathering on sunscreen before sending your little ones out to sweat it off in the hot, humid summer makes watching TV all day sound enticing.

San Francisco has a mild climate with no extremes. Your kids have no excuse to stay indoors.

San Francisco is a city that raises free thinkers and innovative go-getters. It’s hard not to absorb the visionary atmosphere.

Costumes in San Francisco are a way of life. Public events encourage self-expression. There’s no right way to demonstrate your creativity in this city.

Don’t be scared off by the perceived expense of living in San Francisco. Housing is more expensive here than in many other cities. However, the tradeoff is a plethora of budget-friendly recreational activities. It’s always free to go outside, and getting into nature is easy in San Francisco. The city is an urban metropolis that feels more rural than other cities in the country. It overflows with opportunity, which makes it a perfect place to raise your kids.